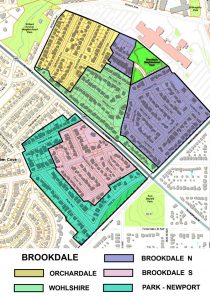 The community now known as Brookdale started with several developers’ dreams, but the land on which these homes were built had many uses prior to that.  Brookdale is part of a large 1713 land grant called “Friendship.”  Echoes of the land grant are to be found in local place names:  the Friendship Post Office Station on Wisconsin Avenue, NW; Friendship Boulevard to the east of Brookdale; and the Village of Friendship Heights just north of Willard Avenue.  In the 1800s through the 1920s, this area was primarily farm land with a scattering of homes. Remnants of prior Indian usage are rumored to be located nearby.  Fort Bayard,

Fort Simmons, and Battery Bailey were the outposts of Union soldiers used to protect the city of Washington during the Civil War.

In 1938, Cooper Lightbown, the famous builder of Marjorie Merriweather Post’s 117-room Florida estate Mar-a-Lago, began to divide what had been farmland on both sides of River Road into plots. He designed and built the first homes as Brookdale North and South.  Today, Brookdale also includes 36  Wohlshire homes, the red brick Orchardale section and homes along and near Willard Avenue, plus several farmhouses that preceded these developments. The area remains shaded by a great variety of trees, large and small, and is brightened by azaleas, dogwood, and cherry trees in the spring.

Brookdale  is a neighborhood of  over 1000 residents in  more than 400 homes.  It straddles historic River Road and extends from Western Avenue (the District of Columbia line) north and west into Montgomery County, Maryland.  In 1958 the Brookdale Citizen’s Association was incorporated.  In November 1971, the Orchardale (Tri-Community) Association was merged with the Brookdale Association.  The Newport area was added in 2017. This created the Brookdale Community as it is today.